On Why I’ve Been Away From Social Media,
or Explaining My Obsession With Virtual Events

Yesterday my 14-year-old daughter asked me why I wasn’t posting on Instagram anymore. “I miss your photos,” she said.

It’s true, I haven’t been posting on any social media much, almost not at all for, oh, about the last six months. There’s a simple explanation — which is that I just ran out of time because I latched on to a project that turned into an obsession, to the point of practically consuming me.

“The real problem was deeper.
We were cut off from our traditional sources
of finding new customers.”

A week ago, I heard a podcast that was a collection of interviews with people talking about what they’d done with themselves during the pandemic — what they’d accomplished, what they’d discovered. These were all positive stories presented as a kind of antidote to most of the negativity we’ve associated with living through this time.

In the next few months, if it hasn’t started already, I predict there will be a plethora of these pandemic stories. It will be kind of like the “what-I-did-on-my-summer-vacation” genre of essays, except they’ll be about coping, about personal discovery and personal breakthroughs that happened while, and because of, living through a pandemic.

I don’t mean to make light of this. There will be a lot of stories about addressing tragedy, some of them will be about the enduring human spirit and about the power of love.

My story’s more mundane. Merely about crass business and commerce, at least on the surface. It starts out as adjusting to a complete disruption of the business I’ve been running with my partners for the past 24 years. And it’s not just that we had a huge drop off in clients at the beginning of all this. That was a problem, but the real problem was deeper. We were cut off from our traditional sources of finding new customers. When you’re in the agency business, losing clients is a fact of life you learn to live with, and you develop a deeply felt belief that you’ll always find new ones because you always do. But suddenly losing your tried-and-true methods for getting new clients, that’s just plain terrifying.

So, if you don’t know already, we run a group of marketing agencies that service high-tech industries, mostly in areas related to media & entertainment technologies. We’ve been virtual almost from the get go, so this working from home is nothing new. But being stuck at home, that’s new. Travel to trade shows and conferences is really big in the industries we work in, and being able to meet people face-to-face at these events was huge, not just for our business specifically but for everyone in those industries.

Clearly we had to do something different.

The breakthrough for us came in April when we decided to organize a virtual pub every Friday as a way to bring our whole team together at the same time. I wrote about it in a blog here (https://www.wallstcom.com/news/we-built-a-virtual-pub/), which basically outlines the big fail of virtual pubs at that time. When all you do is have a videoconference session, it doesn’t really resemble a pub at all, does it? But this offered us the first glimpse of the requirements for a true virtual pub experience, which we were then able to cobble together. And that is an online environment with multiple rooms and simple navigation icons people can use to move themselves between rooms at will.

With that experience, we then sketched out the requirements – what was needed to make a true virtual event for the industry. We concluded you basically need two things: content and connection. The content is the information that you share, and all virtual event platforms focus on this, the ability to deliver your presentation. Connection is about actually connecting with people in a way that would resemble in-person meetings. So you basically need a setting that has multiple meeting rooms that your attendees can move between, with the ability to see who else is in the environment and connect with them, gather in small groups or one-on-one, disperse and regroup with others, and again, and again.

We researched the available virtual event platforms that were on the market, and when we could not find one that could do what we had outlined, could not find one that really connected people, we set out to build a platform that truly put people first. And that’s what I’ve been working on and why I haven’t been on social media.

The development process got a bit crazy because after presenting the concept to a number of clients, we had one that actually bought it. Seriously, we had an idea, and it became a contract … which gave us a deadline to get it built: end of September. Hedging our bets a bit, we organized two development teams to work on it independently, taking slightly different tacks.

“People are going to have to find different ways to connect in meaningful ways.”

At the same time, we began a collaboration with a third developer who was working on the same problem from yet another angle. With three potential solutions, I figured we’d have a good shot at actually getting the thing built in time. It turned out to be a real nail-biting experience. Four weeks before the event, we still didn’t have a working solution … and then the Oregon fires came, and I was pretty much swallowed in blackness for almost a week. I was already starting at 6 a.m. most mornings and still at the computer at midnight.

We did finish it, and we did pull off the September event; 300 or so people from 29 countries participated over three days. I wrote a blog about it here (https://www.wallstcom.com/…/beyond-the-virtual-pub…/), if you are interested.

Since then we’ve done a half dozen or so other events and hundreds of demos. I don’t know if it’s a lasting solution. What I do know is we are living through an extraordinary time. In certain types of businesses, things may never be the same (some people don’t think they ever should be), and people are going to have to find different ways to connect in meaningful ways.

As a side note, even though we developed this for industry events and conferences, we discovered that it’s also perfect as a virtual office. We’ve started using it for that ourselves, and we are now talking to other companies about that. There may be more applications we haven’t thought of yet.

What I have learned from working and studying this is that people don’t learn much from just sitting in front of their computer screen listening passively to someone passing along information in a PowerPoint on a webinar. They get information, but they rarely get inspiration. It’s the interaction of people face-to-face, the give and take of ideas — that’s where the magic happens. It’s something that is hard to pull off in an online platform. But that’s what we’re trying to do.

And that’s the story of what I’ve been doing during the pandemic so far.

If you’re interested in hearing more about the event platform, you can hit me up by email, or fill out the form here, and I’d be happy to talk about it or show it to you. And you can watch the video intro here https://youtu.be/_52Yd6YxoZ4. 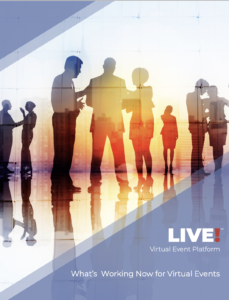