Welcome to the Town of Brome Lake

When the organizers of the Knowlton Literary Festival first contacted the LIVE! team, I admit, I had to do a Google search and pull up a map to find out where this Town of Brome Lake was and how the village of Knowlton fit into it.

And once I figured out the geography of it all, I had to ask myself: what was this seemingly sleepy little, out-of-the-way spot in the Eastern Townships (Cantons-de-l’Est) of Quebec doing hosting a literary festival? 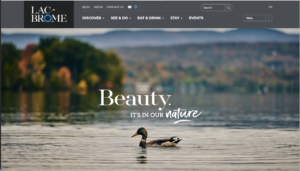 Digging further into it, I discovered these Eastern Townships and Brome Lake in particular have quite a lot going on, and not just in terms of absolutely fantastic rural landscapes with an abundance of opportunities for outdoor fun. They also have a long tradition of art and culture, with a rich vein deep in the literary arts. The area claims the oldest free public library in the province for one thing, and of course, Louise Penny, best-selling mystery author, calls it home and acts as Honorary Patron of the Festival. And then there is the singularly charming bookstore just across from the Mill Pond in the heart of town. 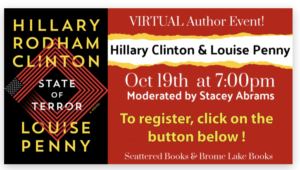 Lucy Hoblyn, the owner of Brome Lake Books, reached out to us in her role as the VP of the Knowlton Literary Festival. She was looking for ideas on how to run the festival in an online environment.

The Knowlton Literary Festival takes place each October and celebrates English-language literature with a particular focus on Canadian authors. Started in 2010, the festival has pulled in writers from across Canada to engage the local community in and around the Town of Brome Lake. And then in 2020, it didn’t. We all know why.

After canceling the festival in 2020, the organizers and the town were determined to make it happen in 2021, even if it meant not doing it in person. While not exactly sure how to pull off a virtual event, they had some ideas and they knew what they didn’t want. They didn’t want just a series of Zoom sessions.

I asked Lucy why she had decided to contact us.

“Because,” she said, “some of our people attended an international women’s day event that was on LIVE!, and over the first 12 months of the pandemic, that was the only virtual event, of many, that they said actually felt like a real event.”

No one on the LIVE! team had ever attended a literary festival, so we got a crash course in that first meeting. And we listened to the particulars of how the Knowlton Literary Festival didn’t just bring in noted outside authors, but really involved the whole community. They presented point-by-point the things that happened at the literary festival and asked how each event could be replicated online. Musicians, theater performances, book clubs, dance and yoga classes, tourist and local community information. Not just how it could be replicated, but how it could be replicated in the most true-to-life manner possible, so it would work for people who aren’t necessarily attuned to or up on the latest online technology.

The fun part about working with people who don’t come from the high-tech industries where we do most of our work is that they have no idea of the limits of the technology, so they’re perfectly willing to push beyond.

The team from Knowlton Literary Festival went away from our first meeting and then within a week delivered a thoroughly thought-out structure for the entire event. They built it around the premise of recreating the village atmosphere where the in-person literary festival would normally be held. They focused on the graphical presentation, creating an event map overlaid against a recognizable view of what would have been the physical location if the event were held in person. Room icons on the map included familiar elements like the VIP Main Stage, the Gazebo, Bookworm Café, and of course the Bookstore itself (where attendees could order their books, with proceeds going to the festival). The organizers felt that if the look and feel of the platform was attractive and familiar, users would immediately be comfortable and willing to engage within the platform, and not be intimidated by any preformed technical fears.

Along with these design elements and the familiar layout, the platform gave attendees total freedom to move as they wished between different sessions/stages and the static sessions/kiosks. This was a key element in the success of the event.

The music and theater events were held in the Gazebo, the Bookworm Café hosted the book club events and talks with local authors, and of course, the centerpiece, the highlight was a VIP Main Stage where the featured authors spoke, took questions and, as it turned out, engaged in some in-depth discussion of historical and current events, politics and science. It included authors coming in virtually from across Canada, from Quebec to Victoria Island.

Lucy Hoblyn summed up the experience:

“Let’s just say, a good part of our audience doesn’t sit in front of computers online all day, they aren’t technology savvy. So one of our worries was that no matter what the virtual platform, a good portion of our attendees weren’t going to be able to navigate it. But the LIVE! platform was incredibly intuitive. And yes, there were those few who just didn’t get it, including one of the guest authors, but nothing flustered the LIVE! team and they handled each user issue with patience and respect. Their focus really was on the user experience not on the technology; they treated our attendees like people, you know, like you’d expect to be treated if you were walking up to the information desk looking for help at an in-person event. It wasn’t just logging on anonymously to a technology platform. It was real people working with real people. All to allow authors to actually engage with their readers at an event at a time when no one thought it possible.”

“So the only real issue,” Lucy said, “was that the online map and the graphical representation we created seemed so real to some people that they thought we were having an in-person event. They showed up in the bookstore asking where the Main Stage was!”

If you want to get some great books, check out titles from featured authors from the festival here.